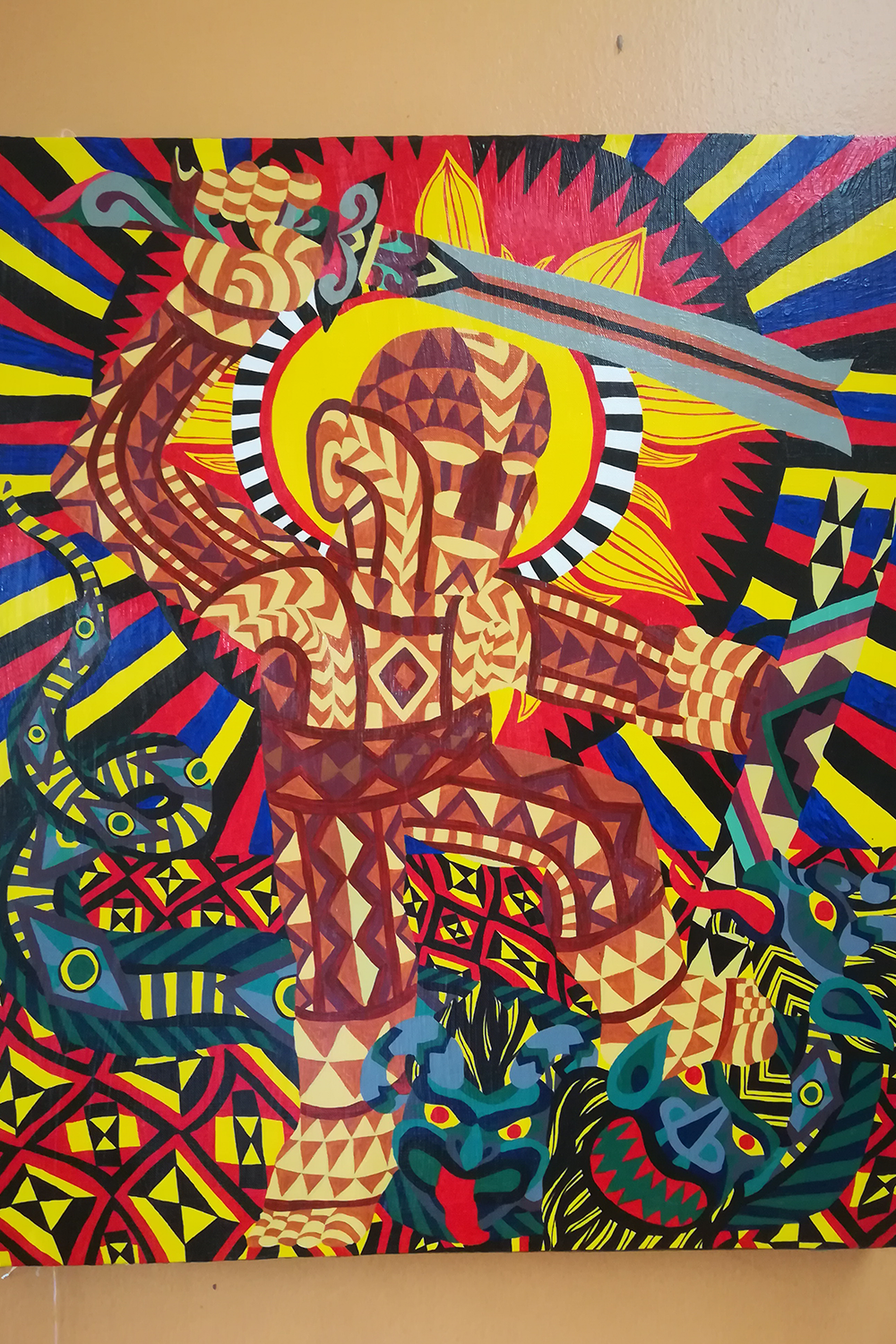 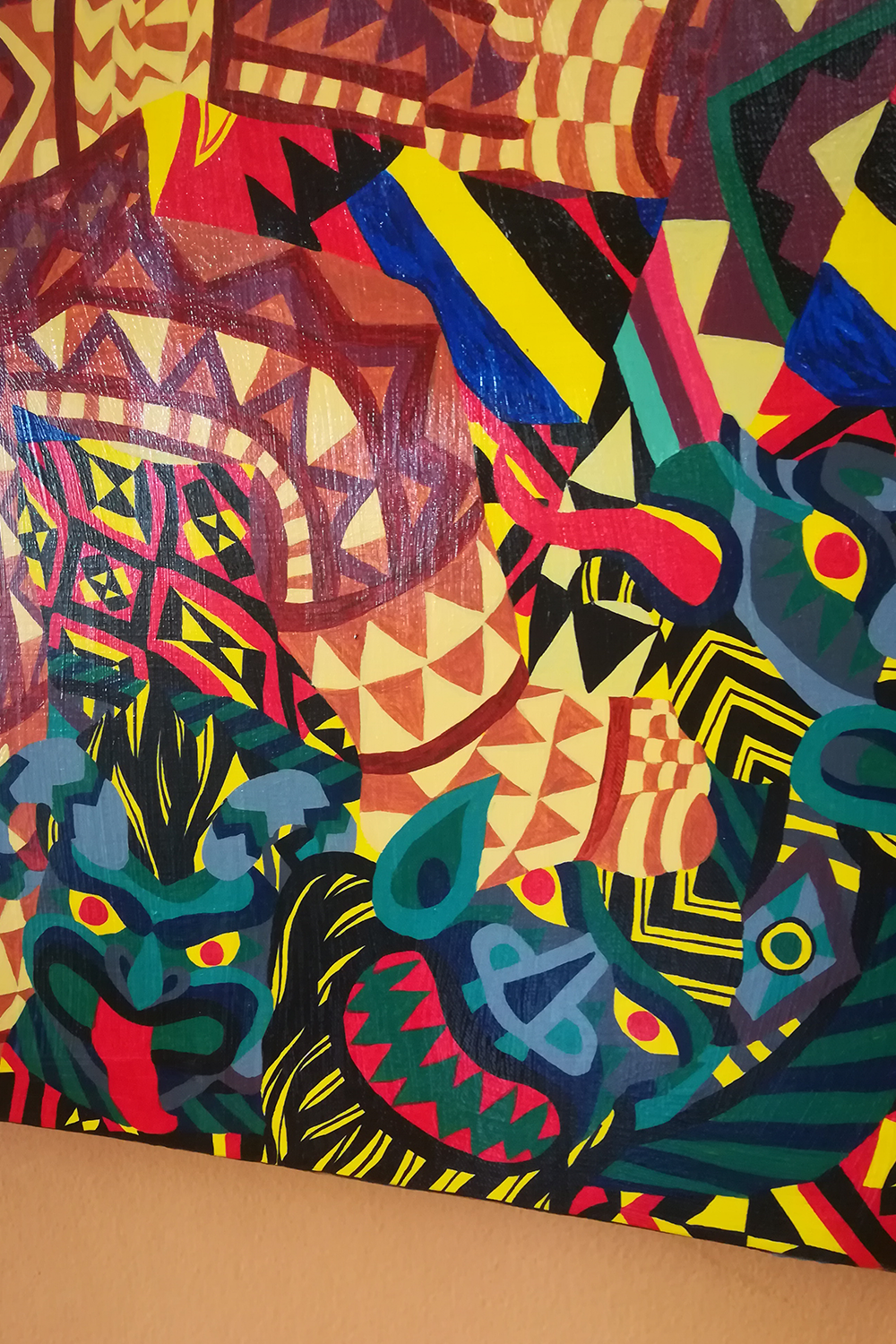 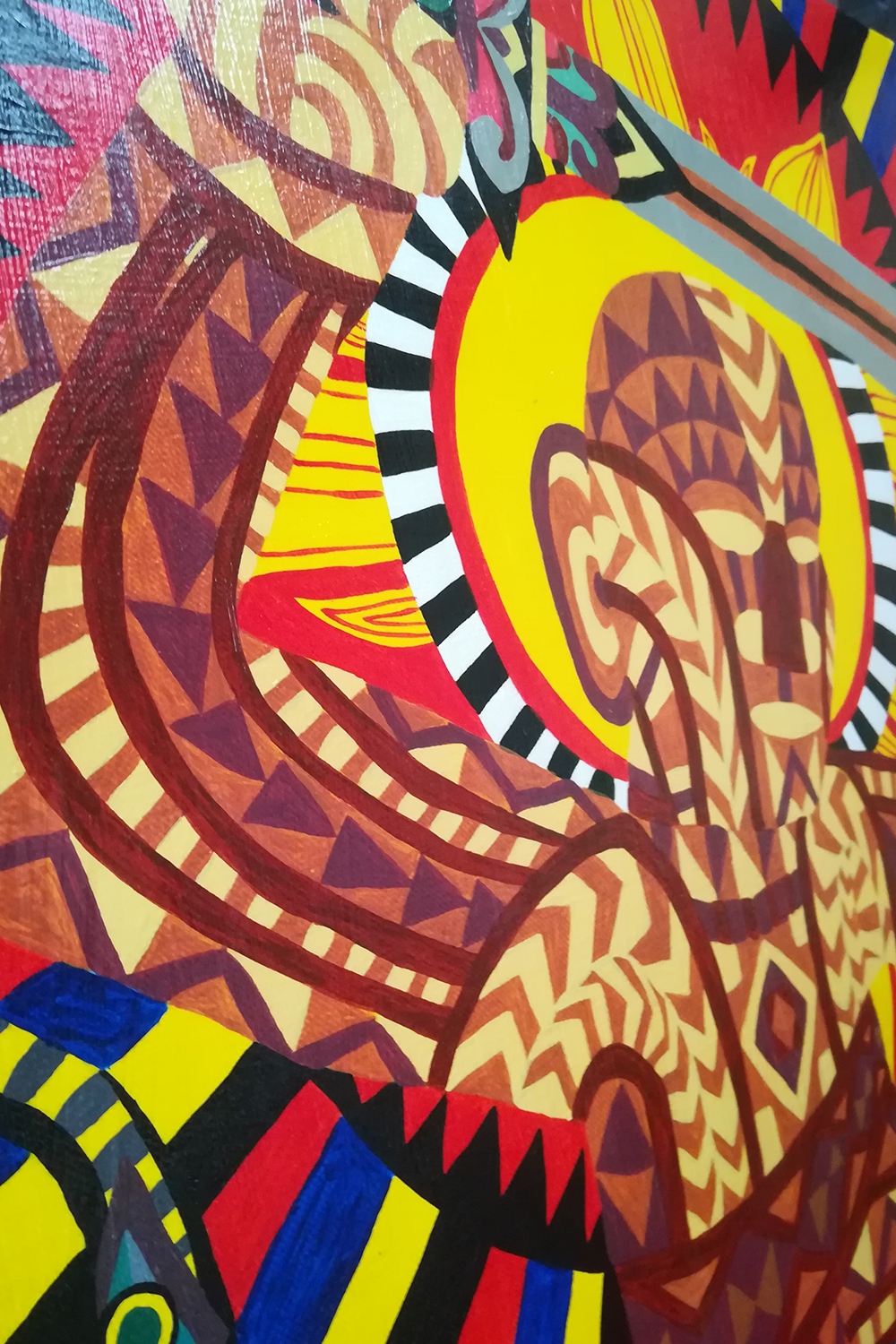 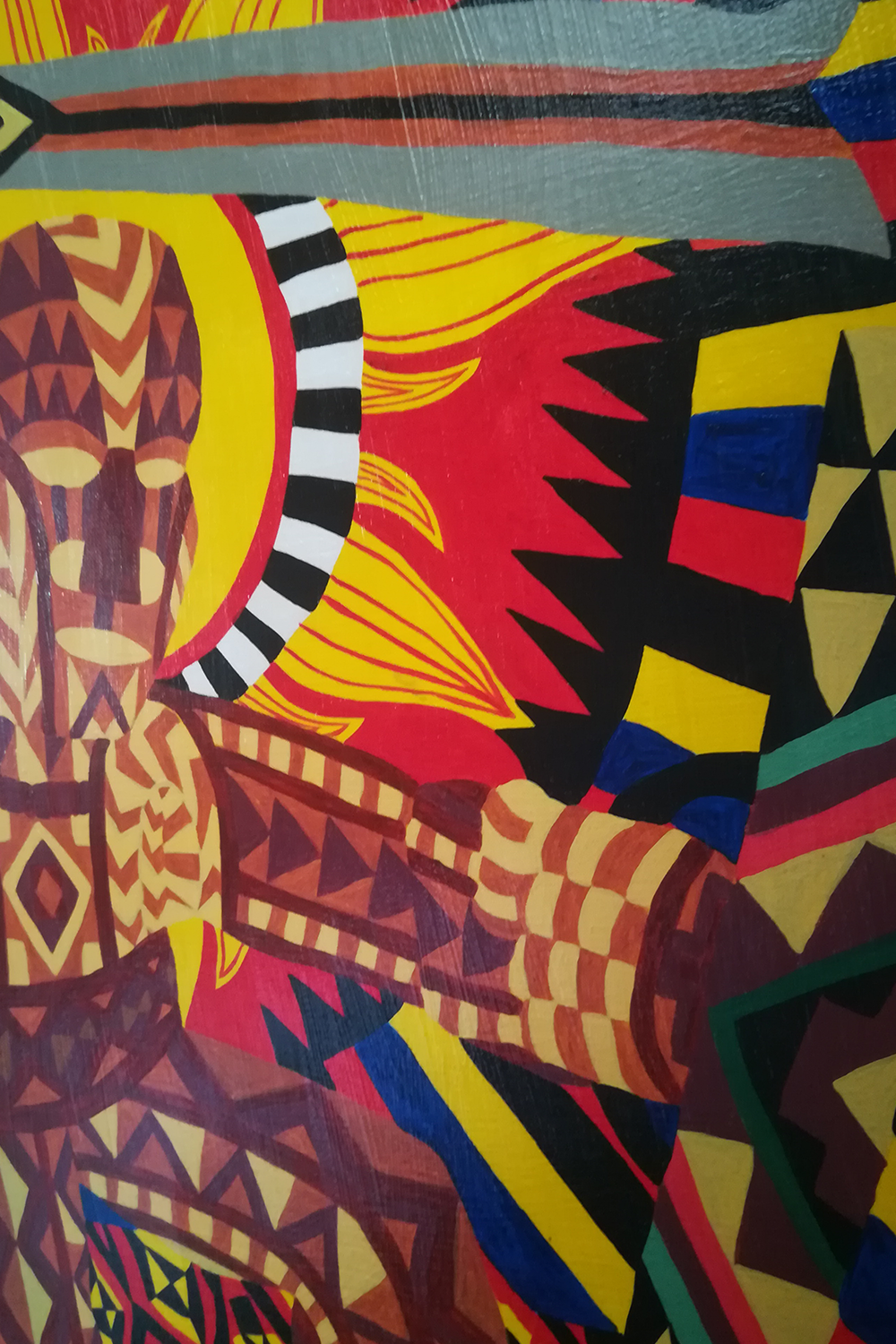 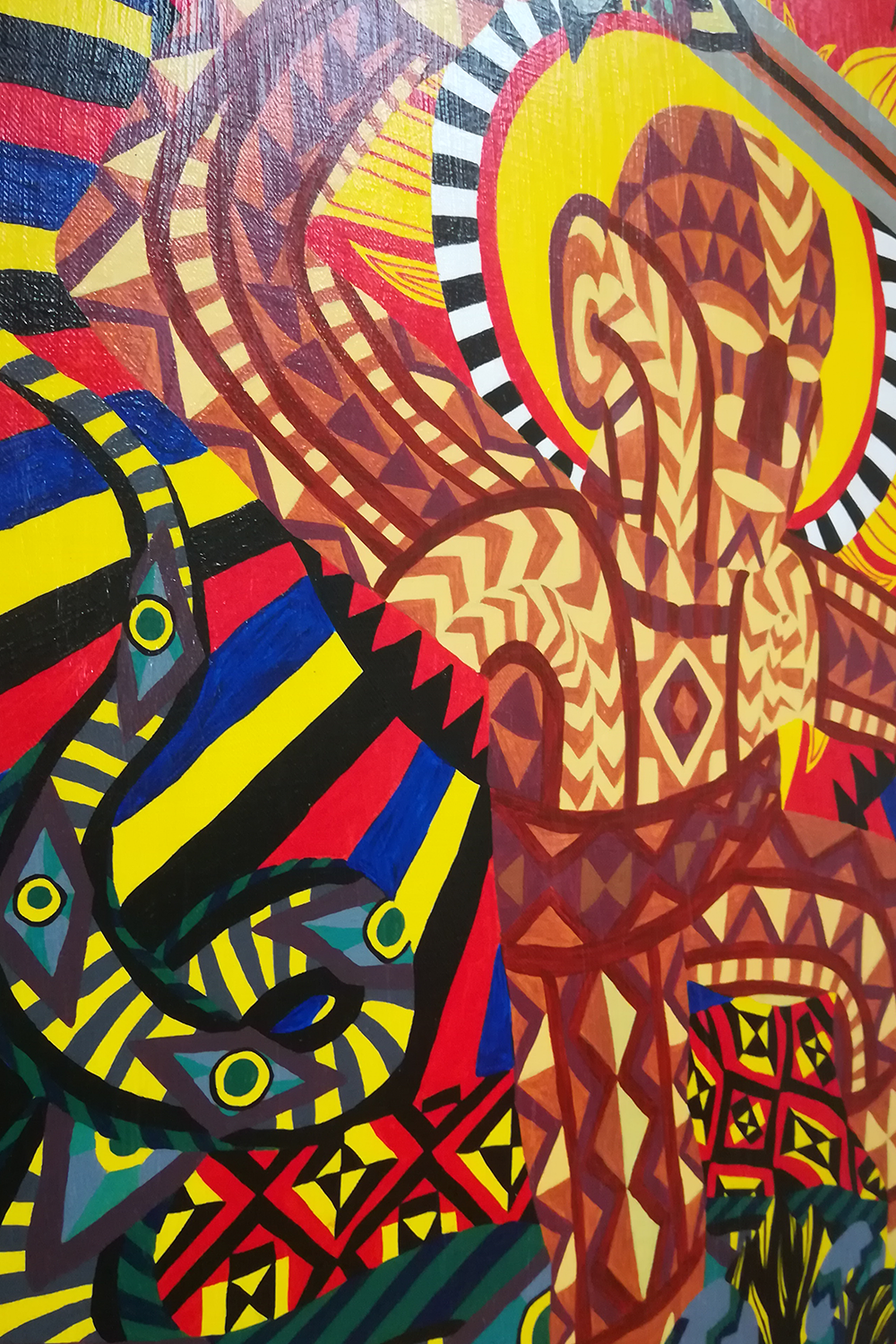 Myartwork constitutes a figure holding a sword and a shield while slaying athree-headed serpent. It is rendered in the folk aesthetics where heavyornamentation, horror vaccui, and vibrant colors are apparent. The patternswhich are inspired from indigenous motifs cover almost everything in the canvasliving it with minimal empty spaces. Such heavy ornamentation paired withvibrant colors leaves the viewers in an optical struggle towards abstractionand figuration.

Here,a Christian imagery of Michael the Archangel slaying the demons is indigenizedwith that of the Pintado holding a kampilan and kalasag executing athree-headed serpent. Such assimilation of images is a direct reference to thehistory and collective experience of the Filipino people in the constantstruggle against colonialism- Spanish, American, Japanese.

Suchportrayal of an appropriated image brought about by colonialism in the mannerof the aesthetics of indigenous art serves as a resistance against the ratherdominant colonial values and taste on the visual art.

Moreover,the image of the Pintado transcends from an artifact and into an icon of thecontemporary Filipino. In the current context, it has become the symbol of theFilipinos, the modern-day Pintados, as warriors battling against the pandemic,state fascism, and apparent colonialism.

Mywork serves to honor the historical role of the basic masses in the struggletowards genuine liberation that started more than hundreds of years ago that continuesuntil now.